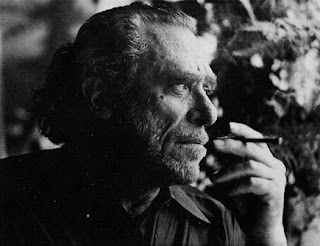 he's alive and well in pedragelejo

i was drawn to
the mole on his cheek
and the grey, greasy hair
bushy knotted eyebrows
creased forehead
that pot belly in a sports shirt
a sure give away

i want to tweek
his purple
bulbous
nose

any minute now
i will call out the names
charles? hank? buk? chinaski?
and if he looks up
if he smiles at me
even once

i am gonna get up
walk over there
cup my hands
about his head
and kiss his
lovely craggy
face.

"Isolation is the gift. All the others are a test of your endurance, of how much you really want to do it. And, you'll do it, despite rejection and the worst odds. And it will be better than anything else you can imagine. If you're going to try, go all the way. There is no other feeling like that. You will be alone with the gods, and the nights will flame with fire. You will ride life straight to perfect laughter. It's the only good fight there is." Charles Bukowski

Today would have been Charles Bukowski's 91st Birthday!

Something For the Touts, the Nuns, the Grocery Clerks & You by Charles Bukowski - Poems and Insults: http://www.youtube.com/watch?v=A42I6u6gtjc