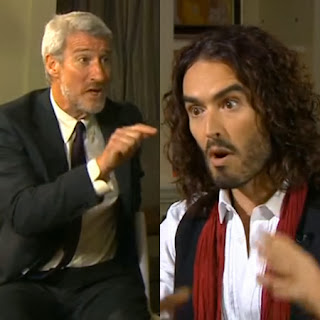 Last week I posted this as my facebook status update:
I know I'm idealistic, but it would be brilliant if every "Russell Brand V's Jeremy Paxman" mention on social media today meant a £1 was given to charity...or something. Just for one day? I don't know where that £1 would come from, maybe the profits of Twitter or Facebook, but it would be so brilliant if sharing the link supported the homeless. or something. So, here’s a game, how about every time you see Russell Brand's name on your time line, you put change in a cup, and then when you go outside, give it to your local Big Issue vendor. Then you’re not just sitting there 'liking' somebody saying what most of us are thinking, but you are actually consciously contributing towards #change, towards the wake-up, towards showing another human you care. or something. or something. I dunno...I'll get my coat.

Its a wonderful life and this story begins one snowy Christmas Eve in London. Jeremy Paxman is Santa Claus, he is dressed in red with a big white beard. Enter the big-brown-eyed Russell Brand, he sits on Santa’s knee. Kind Father Paxman smiles gently and asks him if he has been a good boy. Yes, says Russell, I’ve been very good. Oh ho ho ho, laughs Father Paxman, his eyes glittering with knighthood, he pats Russell Brand on the crown of his curly head. And its a pretty picture: two rich white men debating ‘change’ from the cosy armchair of entitlement.

Russell Brand's vocabulary is eloquent and passionate. He says he wants gifts which most of us fundamentally want, the gift of change, for the fat cats and bankers to be brought to justice. He calls for fairness, a fair distribution of wealth, for the planet to be saved from what was once called ‘climate change’ but is now 'climate changed' And now once sufficiently warmed up, Russell announces that he does not vote out of exhaustion from the treachery and deceit of the political class that’s been going on for generations now, where we have a disenfranchised, disillusioned, despondent underclass that are not being represented by that political system, he says, voting for it is complicity with that system. Or something.

And the crowd goes wild and it trends on twitter. I am wishing that Russell Brand will also ask Father Paxman for world peace, for solutions to tackle global poverty and famine and an end to the arms trade, for people to be more kind, for people to wake up and be conscious of things outside of themselves, to invest in the future of the planet and nourish the roots of equality and our humanity…or something.

Russell finishes by saying that revolution is here! And Father Paxman says ho ho ho! You can see both men are clearly pleased. They entered that room with an intention, that aim has been achieved, and Christmas comes early for the pair of them.

The cameras roll, the lights are bright hot and it is then, ta-da, when Paxman tears off his red costume to reveal he is actually ‘Zeus’ and Brand is ‘Achillies’ and this programme is a Trojan Horse and hidden inside the belly is a whole army of arguments and ideas that trigger twitter and facebook debate and discourse. But beware what is Russell Brands Achilles heel? Hmmm…Ok let me simplify things and put it another way. With a terrific boom of thunder, a flash of lightening, Paxman says "Russell I am your father..." and  reveals he is 'God'  - the beard was a giveaway - and after the interview Russell appears before us all. He leads a peaceful protest through the streets of Londonusalem, riding a donkey and wearing a baggy loincloth. He comes down from that five-star hotel room to deliver his message to all of us pedestrians below: The Brand new commandments. There is much applause, The Russell Brand, he has spoken for us all. He is the Brand new Lenny Bruce. He is the Brand new Bill Hicks. We all cheer and slap each other on the back in agreement, we share the link on facebook and twitter and we love him…or something.

How fickle we are though, barely any time passes until the clock strikes midnight and Russell turns into a pumpkin, or rather into something to jeer and snigger about like our new David Icke. His past is regurgitated and quoted and misquoted, his foibles wheeled out and his arguments picked to pieces by vultures. People are mean spirited. Journalists swoop down like the flying monkeys from The Wizard of Oz.

I cannot stand it, I was rudely awoken this morning with the clanging and banging of hammer and nails. We sit and knit and watch them build the gallows high. We will watch and wait for Brand to weaken, to trip up and fall onto his own sword. It’s all about selling papers, darling. We warm our hands on the flames. Choosing to listen to the bits we like to hear best, the sensational bits, not bothering to look back stage at the intention, the truth and the facts. The cock crows three times. We will stand by and watch as he’s betrayed and then crucified. Because that's what we do and what we have always done - nothing.

Madonna. Madonna's latest work, #secretprojectrevolution is brilliant. Its a call for change, for us to wake up and to join her revolution. I think someone needs to have a word though, because we cannot have two celebrity revolutionary leaders can we? Who is to be our true saviour? Madonna or Russell Brand? Or will they unite? Is it the same revolution? Do we now have two revolutions? I secretly hope they will join forces and get married and be a bit like Mr and Mrs Messiah. But I’ll leave you to decide who would wear the thorny crown in that relationship. And Madonna and Brand’s key disciples and martyrs  should be played by Pussy Riot. Yes. Pussy Riot. Those poor girls, have you read the latest news about the hunger strikes, the conditions and their suffering, rotting in jail for what? For a song? But it should be one of the many things that should remind us how lucky we are to have freedom of speech...or something. Exactly. Hang on a minute. If this was Russia? If Russell Brand was {insert minority}…or something…Oh and now I remember this is show business.

Entertainment. Here we are now entertain us! Let us entertain the consequences of a country where we don’t have a vote, or any choice to vote. Why, then we'd have to close the bedtime story book and go around the back of the Punch and Judy show to see the hands up the arses of the glove puppets. I think it is fantastic, that programme got people talking about ‘things’ for a bit, for a few days people were talking about the occupy movement and democracy, you know until the next sensational nut-sack of crap comes along. You know until Miley Cyrus spreads her legs so wide she shows us the back side of her ovary…or something.

It’s a beautiful day and already the backlash has begun. May I suggest we all play a game. Every time you see someone post something negative and snidey about Russell Brand today drink a shot of washing up liquid. Every time you see someone post something about the revolutionary acts that are happening globally, the beauty of small steps and the natural shift and positive changes that are already in existence - do a shot of tequila. I’m sorry love, but it’s likely you will spend your day stone cold sober and vomiting fairy soap bubbles.

It’s a beautiful day, may I suggest we play a game, go outside and look at the world turning and changing. May I suggest you take a few hours off the internet, go give blood, give to charity, take some of your things to Oxfam, plant some seeds, read a book, do something useful, free pussy riot, use your power, assert your rights, the freedom of speech, the freedom to vote, use your imagination and open your blinkers. The change is happening, the revolution is already here, its inside each and every one of us. If you want change then first you must change inside. And so go get your coat, because by going outside, of course, we are going inside. Or something.


It’s a wonderful life, or something. 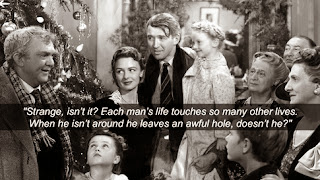