Introducing you to the class of summer 2019 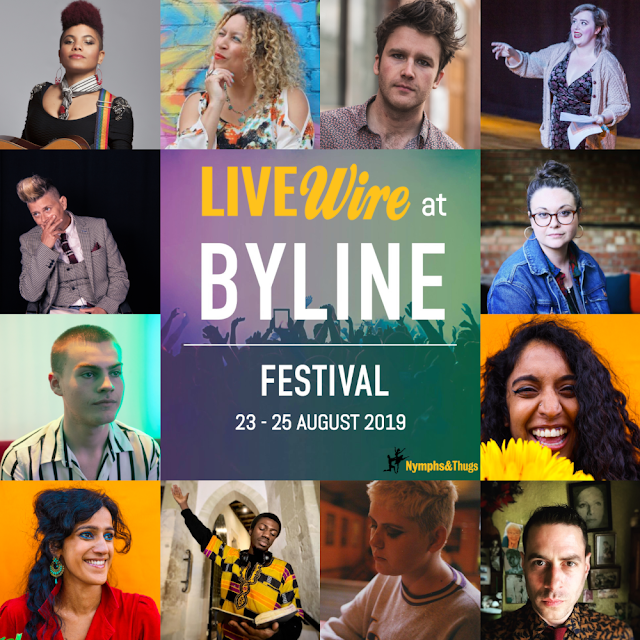 LIVEwire returns to Byline Festival in Sussex for the third year running!

Our ‘LIVEwire’ Salon is a proven hit at the festival, and this year we have no fewer than twelve renegades and rebels, poets and artists, performing for you over the weekend.

Byline is a unique and dynamic festival which celebrates independent journalism and freedom of speech, whilst also targeting corruption and bias in the media, as well as prejudice in wider society. This year’s festival sees Pussy Riot return for another stunning headline set, as well as a huge range of talks, workshops, screenings, performances and more. Click here for more info and tickets. Byline festival starts midday on Friday 23rd August - Monday 26th August, and takes place at Pippingford Park Manor, Nutley, Uckfield - It's about 1 hour from London or Brighton.

I'm very excited to be the Byline Festival Poet Laureate for a 3rd year. Byline is outstanding, uniting truth seekers and truth speakers, the people that stand up and speak out for injustice. 2019's LIVEwire poets reflect this, we are bringing together an eclectic and exciting group of poets. We have poets that raise the roof, emerging artists, rising stars and established names, poets that I feel inspire and challenge us all, poets that come from a place of lived experience, truth and courage. This is the summer of rebellion! Pessimism is for Lightweights!

Now, without further ado, let me introduce you to the class of 2019 and some poets and artists that will rock your BYLINE weekend!

Connor Byrne is a rising star, a poet and performer from Brighton, now living in London. Their work explores gender and the relationships we have with others and the world. They have performed nationally and internationally, at festivals, competed in slams and self published two pamphlets. Thier work is heart breaking, brutal and beautiful.

Oli Spleen is an extraordinary and courageous artist. He is family to me and a unique poet, author, musician and activist. He is constantly evolving and re-inventing himself, this year we have invited Oli to bring some of his music to the LIVEwire stage. Oli released his second solo album ‘Gaslight Illuminations’ this year. It was a tribute to his recently deceased father and also inspired by the emotional fallout of a toxic relationship. It has been described as “a gloriously dark and haunting work” and “a mesmerising work from an artist who has embraced his maturity. We cannot wait to hear this fresh and powerful work at Byline! 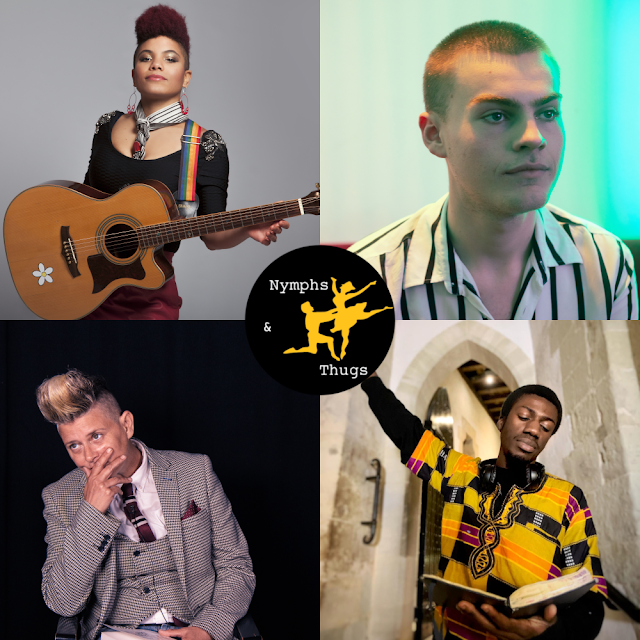 Joelle Taylor is a force of nature and so well loved and respected by me and by everyone on the UK poetry scene. A poetry sister of mine since the nineties, I find her poetry is a powerful rallying cry. She is an award-winning poet, playwright, author and editor who has recently completed a world tour with her latest collection ‘Songs My Enemy Taught Me’. Joelle is widely anthologised, the author of 3 full poetry collections and 3 plays and is currently completing her début book of short stories ‘The Night Alphabet’.
Repeat Beat Poet is a new face to the LIVEwire crew, a powerful performer, a broadcaster and hip hop poet. PJ fuses traditional poetics with hip hop culture to capture and extend moments of time, thought and feeling. He hosts and produces monthly poetry events Boomerang and Pen-Ting and his radio show #TheRepeatBeatBroadcast, and is a house emcee with hip hop label maginary Millions.

Oakley is an extraordinary young talent, originally from the West Midlands, they’ve received playwright development from Birmingham REP and gained a place on Royal Court’s playwrights programme. Oakley has performed nationwide, has been published by #Queer in the US and has a forthcoming collection ‘The Rainbow as a Bleeding Sky’ on Verve Press.

Logan & Manley bring some pure mischief, sunshine and rebellion from the creative northern town of Hebden Bridge, Logan & Manley are full of irie beats, soulful vibes and lyrics that have a message for us all. Live, they loop a sonic landscape of dynamic vocals, keys, guitars and electric drums creating a space for everyone to get lost in the magic of their music. Expect to feel the love from the tips of your toes to the top of your head. 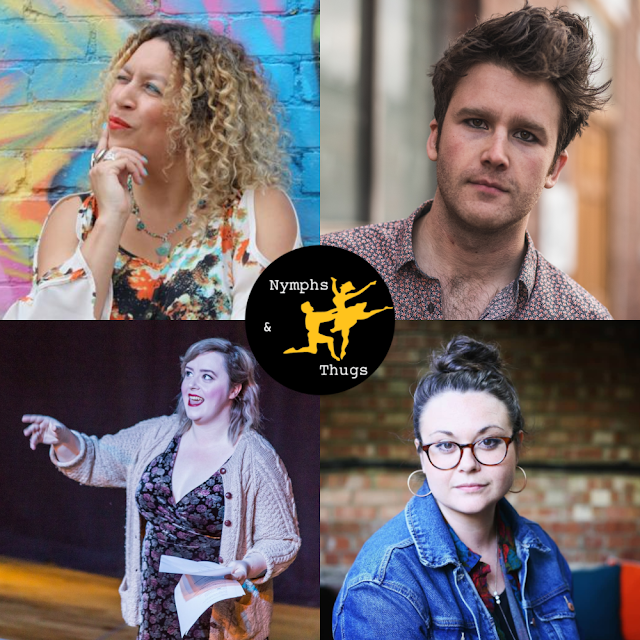 Michelle Fisher is a power house. She’s a writer and performer from Glasgow. Michelle was a resident artist at Roundhouse from 2017-18 and has been commissioned by the likes of BBC and Huffington Post. Her work is brutally honest and tender, she explores wider societal issues, including class and poverty, and how they impact on our daily lives. Michelle hosts the LIVEwire stage on Friday night.

Matt Abbott is co-curator and the organisation behind LIVEwire. Matt is a poet, educator and activist from Wakefield, Matt formed spoken word label Nymphs & Thugs in 2015 and fronts alternative act Skint & Demoralised. His ‘Two Little Ducks’ show explores the working-class Leave vote and the refugee crisis. Matt will host the LIVEwire stage on Sunday night.
Salena Godden, that’s me, poet laureate of Byline Festival and co-curator of LIVEwire. Author of poetry collections Under The Pier (Nasty Little Press); Fishing in the Aftermath: Poems 1994-2014 (Burning Eye); literary childhood memoir Springfield Road (Unbound) and Shade published in groundbreaking best-seller The Good Immigrant (Unbound) My Nymphs and Thugs ‘LIVEwire’ album was shortlisted for the Ted Hughes Award. ‘Pessimism Is For Lightweights - 13 pieces of Courage and Resistance was published by Rough Trade Books in 2018. The title poem is on display as public art at the Arnolfini Gallery in Bristol.

You’ll find us all at BYLINE FESTIVAL 2019 … See you here and there!
Please scroll down for some exciting events happening in late summer 2019! 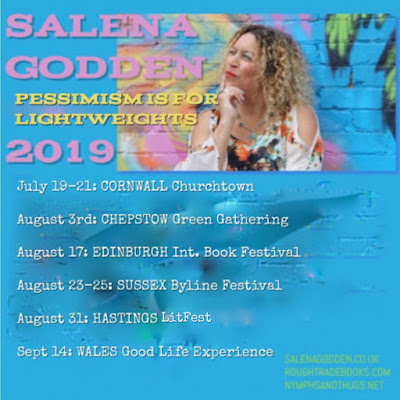 September 5-28 - LONDON, Gallery 46
The Most Powerful Woman In The Universe 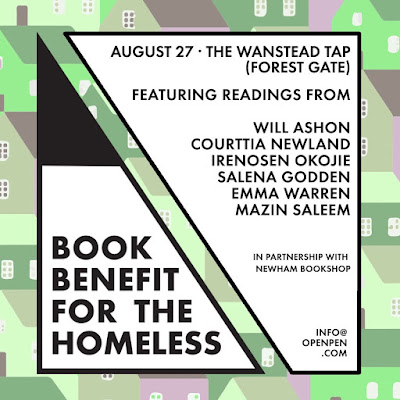 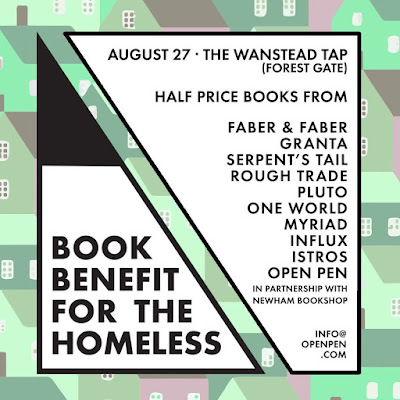 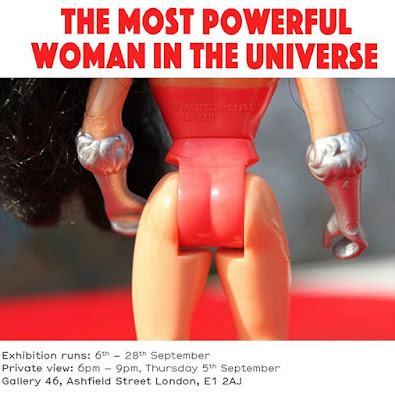 Gallery 46 and Kelly-Anne Davitt are pleased to present The Most Powerful Woman In The Universe.
An empowering, punk, pop show celebrating contemporary women artist

The Most Powerful Woman In The Universe