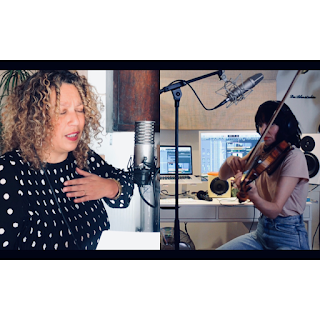 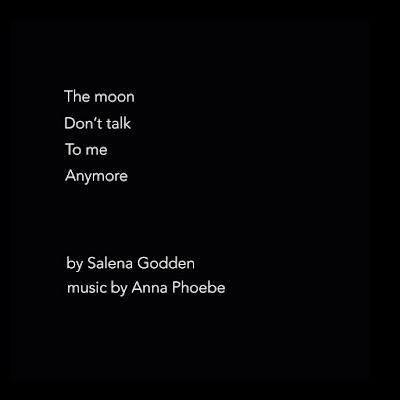 and starlings swing on the skeleton in a cage

and through my dirty window

the cherry blossom was always plastic

bought for a fiver from down town China town

and the moon don't talk to us anymore

and my white tablecloth is stained with coffee

which came from a country already in flames

and the moon don't talk to us anymore

she is rising fat and full and furious with grief

a mourning that washes up with tide after tide

and the tide that rises with the moon

the salt water crashing to shore

and the moon won't talk to me anymore

and the night is dead and the dark is long

and the rain pours down like the sky's all a river

and the moon don't sing

and the moon wont sing

and the fear spreads and seeps into everything

and the moon don't talk to you anymore

you have memories of sleeping in your clothes

like a bad dog on a blanket on the floor

are these memoires or premonitions?

because the moon won't talk to you anymore

and the moon hangs heavy

and the sun has turned his back

and all I see is his coat of clouds

and the rain washes any decency away

but the sound of the washing machine is a comfort

it's like the sound of the sea from what you remember

from a postcard someone sent you from before

remember? it was stuck to your fridge door

it said I wish you were here

and I do, I wish you were here

because the moon won't talk to us anymore

the fridge feels safe, so stock up the store

you hope the delivery man washed his hands

cleaned his van, sanitised his face

and has no next of kin

oh we are the lucky ones, aren't we?

hiding at home, locked in our houses

wearing pyjamas and boosting the heating

try not to think of the poor or the elderly

those that 'aint safe and those that aren't eating

think of the food banks, the people in cages, all ages

and the kids that needed that one hot school meal, it got real

all the folk who cannot afford the bills

the unpaid time off work, the medicine, the pills

and the moon 'aint shining anymore

and the gods are all stone cold silent today

hope is at the bottom of a well

and there's a hole in my bucket

but I keep turning the handle

because this too will pass

and nothing is forever

and all pigs are equal

but some pigs are more equal than others

speeding off in private jets to bunkers leaving their brothers

when they voted in this mess, it's flawed

and the moon won't talk to them anymore

and the moon don't talk to them anymore

and well we all didn't picture it this way

you hum along to an empty fridge

you talk to the washing machine

because it's face is as round as the moon

your stand there clapping at a feeling

with scratch marks on the door and the ceiling

words by Salena Godden and music by Anna Phoebe

Before the Coronavirus pandemic, poet and author Salena Godden and violinist and composer Anna Phoebe were on the phone planning a collaboration for a special live show at York Festival Of Ideas - The event was planned for June 2020. Although they had not worked together before, they were excited at the prospect of this new collaboration. Due to the pandemic, the festival was cancelled, but the two artists decided to experiment and make work in lockdown remotely. And The Moon Don't Talk To Me Anymore is the first of these experiments. Salena and Anna both hope to perform this work live on stage one day, this work contains that wish.

The first raw drafts of this poem were written under the March full moon, in the early days of the UK lockdown, as the Coronavirus crisis exposed cracks and flaws and inequalities and a need for change; a time to envision ways to rebuild and reconnect. This work is centred in exploring that, our connection and disconnection, the social, the political, the environmental and the spiritual. By sending files of words and music, audio and film via emails and the internet the two artists are connected by the work and a shared human expression and experience.


This is the blues: the feel of this piece is a melancholy moon bath. This piece is like a candle we light under this May full moon with acknowledgement of human loss and universal waves of grief felt by so many. We are all under the same moon, but we are not all safe and equally protected and cared for. There are waves of miscommunication, panic, anger, fury and outrage, but there are also waves of hope and kindness, we hold onto that love, riding waves of hope through all of this: Hope is at the bottom of the well ... but I keep turning the handle. 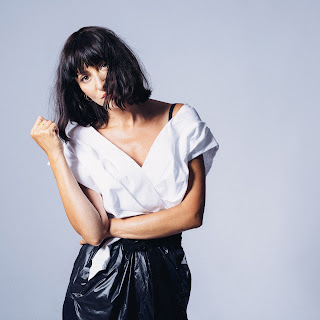 Anna Phoebe:
Anna Phoebe is a composer on cross-genre collaborative projects, working with science, poetry, dance and art. Between Worlds is an ongoing project communicating science through music. She is currently collaborating with the European Space Agency, writing a musical response to their Earth Observation Data, tracking climate crisis. She has previously worked with Cancer and Alzheimer’s research at the University of Kent, writing a 40-minute choral/ensemble work, which premiered in 2019. Anna won Best Composer at the Underwire 2019 Film Festival for her score for short film ‘Belittled’. She is currently scoring soundscapes set to ‘England Poems from a School’ - poetry written by refugee children living in the UK, working with Lorraine Ashbourne and Andy Serkis. As a performer Anna Phoebe has toured concert venues, arenas and festivals throughout the world, both as a solo artist and with multi-platinum selling bands including Roxy Music and Jethro Tull. Her band supported Bob Dylan at the Rock Legends Festival in Poland. Anna’s instrumental duo AVAWaves released their debut album Waves in 2019 on One Little Indian Records. She is currently touring and recording with Ivor Novello Lifetime Achievement recipient, Nitin Sawhney CBE -  www.annaphoebe.com 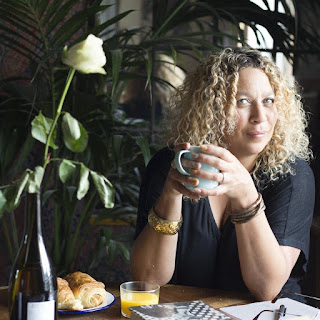 Salena Godden
Salena Godden is a poet based in London. She is an author, activist, broadcaster, essayist and memoirist whose work has been widely anthologised. She has had several volumes of poetry published including most recently Pessimism is for Lightweights (Rough Trade Books) and a literary childhood memoir, Springfield Road (Unbound). Her timely poem Pessimism is for Lightweights was donated to The Peoples History Museum, Manchester, where it is now on permanent display - The work was unveiled in February 2020 to mark the museum's 10th birthday. Salena has recorded several albums, most recently her spoken-word album LIVEwire (Nymphs and Thugs) which was shortlisted for the Ted Hughes Award in 2017.  Canongate pre-empted world rights to her debut novel Mrs Death Misses Death, described by the publisher as an “electrifying genre- and form-defying firestarter." This debut will be published in the new year, January 2021. www.salenagodden.co.uk 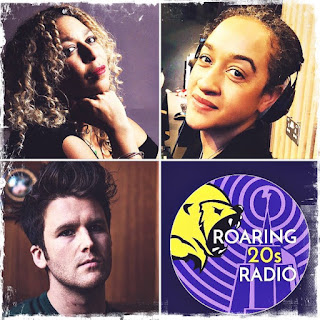 NEW SHOW: The Lockdown listen is out NOW presented by

Roaring 20s Radio is available as a podcast 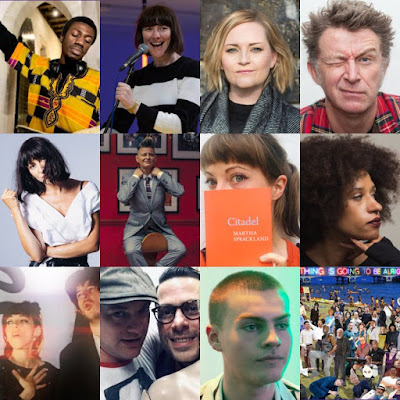