New published work:
Connecting Nothing with Something - a coastal anthology
Hidden history, the ghosts of youth culture, white cliffs, empty holidays and kisses under the pier. Through fiction, poetry and illustration, this collection shines a light on life at the periphery of an island nation. Features Salena Godden, Daniel Cockrill, Iain Aitch, Katrina Naomi, Rowena Macdonald, Chimene Suleyman and many more, plus a foreword from Travis Elborough, Pre-order ‘Connecting Nothing with Something’ for an exclusive price of £6.99. You will receive the book before it is in any bookstores this summer. www.influxpress.com 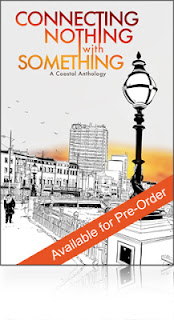 I’m described as ‘The doyenne of the spoken word scene’ (Ian McMillan, BBC Radio 3’s The Verb);  ‘The Mae West madam of the salon’ (The Sunday Times) and as ‘everything the Daily Mail is terrified of’ (Kerrang! Magazine). I write and perform poetry, fiction, memoir, radio drama and lyrics. My most recent book of poems, Under the Pier, was published by Nasty Little Press in 2011. I’m also known as The General of The Book Club Boutique, London's louchest literary salon, and as lead singer and lyricist of SaltPeter, alongside composer Peter Coyte.

I’ve appeared on BBC radio as a guest on Woman’s Hour, The Verb, Bespoken Word and resident poet on Radio 4's Saturday Live. Most recently I wrote and presented a documentary, Stir it Up! - 50 Years of Writing Jamaica for BBC Radio 4 in 2012 with award-winning producer Rebecca Maxted. This programme included excerpts from my literary memoir 'Springfield Road' which is being published by Unbound, its crowd funded publishing, please visit unbound.co.uk.