What a week! What a party! Last week the Book Club Boutique launched my book‘Fishing In The Aftermath Poems 1994-2014’ at the elegant and stylish Vout-O-Reenee’s in East London, with thanks to beautiful Sophie Parkin and her gorgeous daughter Carson Parkin-Fairley.

'Vout O Reenee's' is a beautiful club and a great venue for The Book Club Boutique, its like stepping into a painting. The floors were painted by our friends Keelertornero

Before this wonderful party disappears and fades into a distant and foggy memory, here are some highlights and pics. Author and club owner Sophie Parkin and I have been friends for a decade, we met in Soho at the legendary Colony. We were talking on the phone, planning this launch, and it was Sophie who suggested a 'Salena Karaoke' where guests chose poems from the book and performed them - To tell you the truth, it was like being at my own funeral, listening to people say such very lovely things about how we met or what my poetry means - but I was alive to hear it all, it was quite overwhelming. There was a conflict of emotions, some of my poetry is filthy, my words even cruder from other peoples mouths and I wondered what possessed me to publish these tirades. At other times the readers brought something completely new to the work, musicality and style. Some did parody, hilarious mimicry whilst others chose page poems I have never read on stage. It was so generous of the twelve special guest poets to come and make the party swing and to support the book. I feel very humbled and honoured and...loved.

Thanks to the lovely Iona Lee we sold dozens and dozens of signed books. Iona is a young and brilliant Scottish poet. We met in Edinburgh last winter, I encouraged her to get on stage and she did her first ever gig under my watchful eye - definitely one to watch.

Michelle Madsen was our MC and she hosted proceedings and rocked up with all that wonderful energy and gusto that we love her for. With her warm and wonderful hosting skills she managed the raucous crowd and later in the night she performed a mad Madsen version of ‘A Letter To An Air Stewardess’

Iona Lee read one of the quieter pieces in the book 'Blackbird' and made Dickie, my significant other cry.

Talking about emotional performances, thank you to Robert Auton. He chose to read 'A Loner In A Crowded Head' a poem I have performed very rarely and always with some hesitance, its a long and brutal poem and there are no easy jokes in it. I wasn't the only one that was touched by his reading, author Alice Furse wrote about Rob's performance, favouriting it as a highlight of the night. Alice also saluted Joelle Taylor who licked it like she liked it! You can read Alice's review here on her tumblr. Joelle Taylors version of 'Imagine If You Had To Lick It'  was so very good.

Next I'm remembering Daniel Cockrill and his version of my anti-war poem ‘A Strong And Stiffly Worded Letter’ Dan's version was beautiful, a calm and considered reading and better than I have ever read it. I had never thought of reading it slowly and perhaps I will do so at my next gig.


Claire K Nicolson and Sophie Parkin inadvertently chose the same poem 'He Has The Same Dream' and both of them Betty Booped it! Two very different approaches to the piece, Claire made a song out of the poem and played the uke and made everyone sing shoo-boo-bee-doo.

Roddy McDevitt read 'Twat' delivering it in the voice of Rik Mayall, saluting 'the peoples poet'

It was a great party and many laughs were had. Somebody thought my mother and my mother in law-to-be were a gay couple. I performed 'The Good Cock' and Roddy McDevitt danced provocatively and rudely in front of them, as though by dancing rudely in front of them they wouldn't hear the very rude words. I told my mother she isn't permitted to read this collection but I doubt it matters now.

My great poetry comrade Tim Wells chose to perform  'Eyes like Woodlice' a poem I used to do for gigs with Tim in my earliest years. Xavier Leret read a gentle piece I wrote during the process of writing Springfield Road about finding my father's grave, a quiet poem titled 'I Found My Father'.The brilliant comedy actress Karen Hayley picked the wings off butterflies with 'Papillion Auschwitz'

Rachel Rose Reid did unspeakable things to love! Rachael's version of 'I Want Love' was surreal, such filth, I have never heard her even swear before. And Amah-Rose McKnight-Abrams took us on a one night stand in'Viva Las Vegas'

It was a magic magic night...
Thank you to Kevin Richards for spinning the tunes too! I am utterly blown away. Thank you to all BCBoutique friends and family and my mums and my partner Richard Cripps and thank you to my baby sister Jo-Ann, who headlined and ended the night by rocking us all with her kick ass singalong version of ‘WE ARE THE CHAMPIONS!'

"Every launch party should end with We are The Champions" tweeted Daniel Cockrill the next morning and I must say I wholeheartedly agree!

Also Gevi Carver wrote this: "Anyone who has ever felt frustrated that literature does not speak to them, or that politicians do not represent them, or that to have a relationship with another human being is incredible, cannot help but have their spirits lifted by this collection. It is joyous to read, at times angry, at times tender, always driven by the most compelling of personalities. And for anyone aspiring as a writer, may Godden’s sign-off in ‘A Letter to a Young Poet’ ring true – “keep the ink wet and keep it burning.” Opus Independents Review: HERE

Are you at any festivals? Come find me reading here...

Lastly, something for your ears - On Friday I joined Chris Redmond of Tongue Fu on The Dojo, the home of spoken word and poetry on Soho Radio.  We talked about poetry, past and present, and the collection ‘Fishing In The Aftermath Poems 1994-2014’ I read some poems from the new book and shared music from my archives,  from  Coldcut and SaltPeter. You can find this programme on mixcloud. I have also added some more archives to my mixcloud here too http://www.mixcloud.com/salenagodden 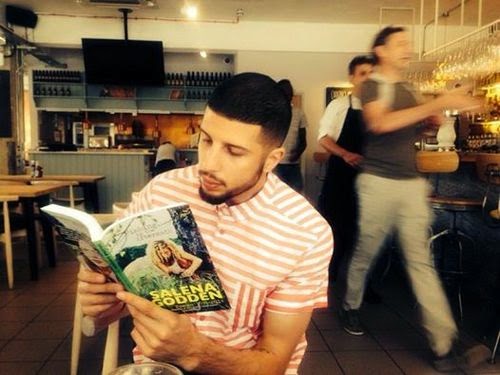 "Everyone should at some point in their lives read Salena Godden’s book. There are stories and poems in there that will follow you into sleep and dreams. Check the Burning Eye website for copies.”
Anthony Anaxagorou 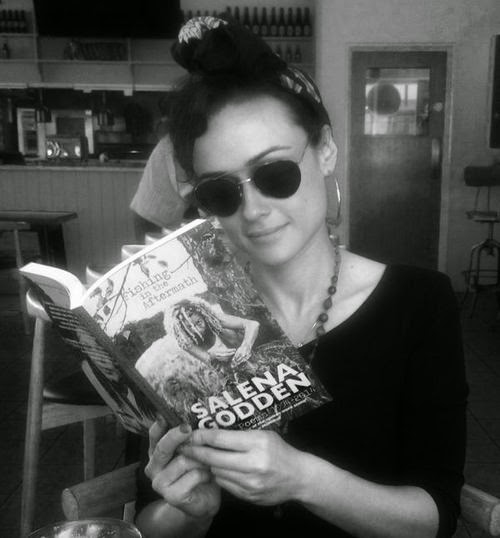 Sabrina Mahfouz
"Great delivery from @BurningEyeBooks today. The woman who lit the path for us @salenagodden ‪#‎fishingintheaftermath‬" 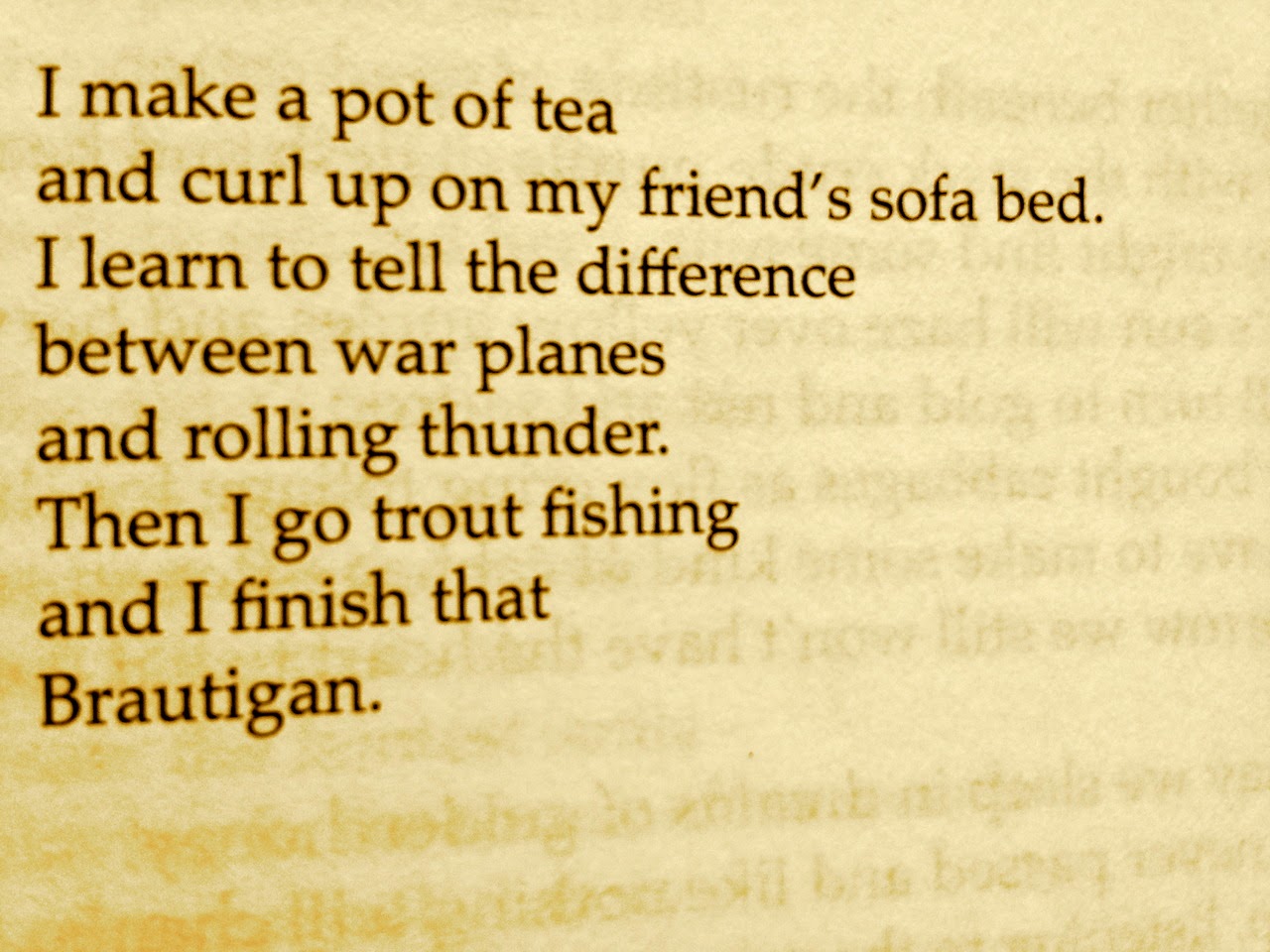 'I learn to tell the difference
between war planes
and rolling thunder.'

'Fishing In The Aftermath'
by Salena Godden