FROM BOHEMIA TO BESTIVAL TO BARCELONA

FROM BOHEMIA & BESTIVAL TO BARCELONA

What a messy and sticky summer…And now it’s the middle of September. I have a mouse living in my toaster and outside under crisp autumnal skies, the leaves are being painted red and the conkers are splitting in the gutter...but there are all these memories of the last dog days of summer, of the last of the festivals and shenanigans. A summer of hay bales, cider in paper cups and the fizz and buzz of the crowds. So here then we have Bohemia, Bestival &MMVV in Barcelona… BOHEMIAN RAPTURE I remember as I came to something was awry, I was too close to the ceiling. I could smell wood smoke and bonfires, and all I could taste in my dry mouth was spiced rum. I lifted the sheets and saw I had slept in my dress. My legs were scratched as though I had been tap dancing in a bag of cats. Clearly I had been at it again. I lay there for at least ten minutes racking my brain to remember where I might be. I sat up and whimpered out the words ‘Where am I?’ Looking around I ascertained I was in a boys dark blue bedroom. There was a dart board and trophies for karate and a poster of Manchester United. Whose bedroom was this? Where on earth did I crash and burn this time? Aha then thankfully that was when I heard the familiar sound of my nieces and my own name and I realised I had made it to my brothers house to sleep and was in the spare top bunk of my nephews room! What had I been up to this time?

Now I remembered…I had been singing with SALTPETER at BOHEMIA Festival in Tunbridge Wells, Kent. What a lovely party it was too! This was a magnificent gathering of eccentrics and fruit hats. There were plenty of waxed moustaches and filly’s dressed as though for the Charleston playing tennis and swigging pink champagne from the bottle. SALTPETER were on really early, Saturday at tea time, however the exciting part was that this was the first time we played with our new 5-man line up - Here we are then, THEOLONIUS MONIAK is now on guitars, JAMES ‘secret weapon’ BURKE on drums, MAX D’ZEE DORAY on bass, PETER COYTE on keys and science and me, SALENA GODDEN on vocals and lyrics…Big belated thanks to THE PONY COLLABORATION crew for lending us the drum kit too! We enjoyed a spell binding set from EVI VINE and her unique and beautiful haunting songs. After our gig and at night fall, we rocked out to the revolutionary whiskied call of the immense BLACK FRIDAY, now that was so much fun, that band featuring the brilliant LOUIS ELIOT was a really wild energy, the tent was literally smoking and rocking. This was followed also by yet another firing kick ass set from NED & MAFF of THE EGG, we love them boys…oh yes we do.

That night we went around the yurts and wigwams making new friends. I recall a true Alice In Wonderland moment, when we joined a charming mother and daughter for a glass of wine, we all drank from crystal glasses, sitting in a tent, at a dining table with a candelabra. I also recall MAX DORAY having a group of boys enraptured as she fellated a bottle of bourbon. Then following a path of Chinese lanterns and music, we discovered a wonderful party lost in the deep woods. I scrambled around in undergrowth, climbed into trees and searched for wood nymphs. I swear there were fairies in there, I had an overwhelming sense of being watched from above...they’re in the trees… For some silly reason I hid my bag from myself. I was quite chilly in a tiny black dress and so DAVID PIPER gave me some black velvet curtain makeshift trousers. In the end my bag was found under some guitars backstage…After that I somehow hitched a lift to sleep at my brothers…but that part is a mystery to me. I was supposed to go to V FESTIVAL for the day on Sunday, but GIRLS ALOUD and COLEEN ROONEY I could do without. Instead I spent time with my family and my tiny 19 day new niece. When she held my finger in her hand I felt my edges literally soften…momentarily. www.myspace.com/theponycollaboration www.myspace.com/blackfridayplymouth www.myspace.com/evivine

BESTIVAL - The Isle of Wight was a flood of mud. Arriving with KELLY THE GREEK on Saturday morning in pouring rain, this festival was clearly not for the faint hearted light-weight. There were people leaving as we arrived, shaking their heads and dragging sodden bags behind them, dolefully telling us to go back because ‘It’s raining’ how we laughed at them, ha ha! This was the best mud-fest of the summer. I was booked to do poetry with a wonderful crew, a bill which featured and included stars of the spoken world - EXCENTRAL TEMPEST, JONNY FLUFFY PUNK, MARK GWYNNE JONES & DISRAELI all beautifully hosted by ANGRY SAM. We had a mid-afternoon slot, Saturday and Sunday at 3pm in the Restival Arena. There were two good things with this, firstly The Restival Arena had some green stuff, erm…grass…actually still poking through the mud and so it was a little easier on the thighs to walk about up there. Also the poetry was being read indoors in 5 yurts kinda sewn together. This meant that we had a packed and captive audience, folk needing boot-rest and a dry-fag-break, whilst also getting to hear some mighty fine poetry performed. I really enjoyed these sets and had such sport with my fellow poets too. There was so much music, mayhem and mud wrestling matches.

Other highlights included hanging out with the CUBAN BROTHERS and our nice man HOWARD MARKS backstage; Also being with HOWARD MARKS drinking wine in the wings on the big main stage whilst UNDERWORLD played ‘Born Slippy’- How exhilarating to look down to see a sea of faces, bodies cajoling, literally slurping and slipping in the mud below; Also really enjoyed GRACE JONES, dressed to kill…Only topped by GEORGE CLINTON’s ‘Maggot Brain’. It made me sentimental for a while, damn, that’s THE greatest guitar solo isn’t it? We also caught wicked sets from the fantastic PRINTS OF WHALES, down and dirty music that was indeedy and the crowd was just as filthy too. Plus a superb show by the delicious SOPHIE BARKER we overheard people saying things like “we love her…” “ooh yes we do!” “..she is well hot!”

The rest of Bestival…well there really was no rest. We seemed to have mud everywhere, in our pants, under our socks, beneath our eyelids. KELLY THE GREEK and I made new friends with a crew of feral beauties and kick-ass goddesses. With them we had balloons and were laughing and gurgling hymns, we sat on plastic blow-up furniture with a wheelbarrow filled with boxes of booze and fags. We floated in lakes that were once green fields, littered with abandoned tents, crates of beer, sleeping bags and so much useful tat. We were wombles 'making use of the things people leave behind'  - And people left everything behind and I mean everything. That last night we managed to make a fire to keep us warm, how it stayed alight on a puddle of sewage I have no idea? It took us two days to get off site and to the nearest pub for much needed bloody mary’s and sustenance. The ferry men were quite strict and were not going to let us leave the island because they said we were too dirty and filthy for public transport. I am not sure if they meant that metaphysically or mentally or spiritually…But I went home barefoot because they made me dump my caked muddy boots on the harbour. When we eventually left port though we had a party on the ferry….on the train…and all the way home.

MMVV - BARCELONA Isn’t it the best thing to get off a plane and feel that change of temperature, the heat oozing off the runway tarmac? Its still summer in Spain, that warm and golden light. When we arrived at the festival information centre, there were posters of SALTPETER everywhere. Isn’t this also the best thing, to arrive at a gig and for things to be promoted and to go smooth and easy? This was one of those, one of those wickedly brilliant gigs, we are and were very grateful and thankful to VANIA for setting everything up…thank you so muchly! There were about ten or so stages throughout the town of VIC, showcasing all kinds of bands from all over the world. Vic is about an hour train ride from central Barcelona and it’s a former ancient Roman village with winding cobbled streets and leaning narrow buildings. We sat in the main square and had a long and lazy lunch, hearing a cacophony of instruments sound check and echo off the tall buildings. Our stage was also open air and situated by a river. Its an auspicious thing to play music by flowing water, i think its as lucky as playing in churches. That first evening we met many other bands, agents and promoters and were given gifts of T-shirts and we all swapped CD’s. Then we headed back to the hotel and in the pitch black darkness, I could sense we were going somewhere high up and on the edge of somewhere, my ears popped. I woke up very early in the morning, at the crack of dawn, and threw open my curtains to see where we were. 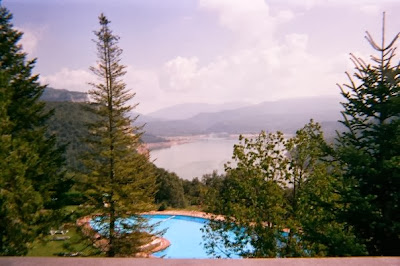 What a spectacular view…a lush green lake in a basin of mountains and rugged landscape. It was quite breathtaking. I took breakfast alone and relaxed, smoking and drinking coffee under the wide sky. There was a rise of heat scorching away the morning mist, the majesty and age of the hills and most curious of all a church steeple poking up from the centre of the lake. Apparently there was a village under the lake and when they drain the reservoir you can walk around the village. At lunch we imagined old bearded widows knitting under water, folk with goggles posting letters and people with gills hanging out laundry. That day was bliss, we swam, read, chatted and cat-napped by the pretty turquoise swimming pool. It was a totally perfect day and a real treat to be so summer hazy and lazy before a gig. The concert was enormous fun.
We did a classic SALTPETER kick ass show. Strong songs for me were ‘OI OI SAVALOY’ with the lyrics changed to OI OI CHORIZO. I also enjoyed the Spanish theme to ‘MAKE LIGHT’ and remembered the original 2002 lyrics that used to go ‘Mi Corazon, boom, boom, boom’ thrown in for good measure. After the gig there was much merry making. We were now a dozen strong and we all went in a gang for a lovely repast of wine and tapas, consuming millions of courses, plates of patatas bravas, queso, chorizo, olives and then more wine after that. This lead to dancing into the night and bar hopping around the old town of Vic at dawn. I seem to recall as the sun came up I made friends with a man who was over 100 years old. I hugged him and bought him brandy…and after that Spanish brandy session, well as they say, that’s another story….