The Bird and the Bee

Susie never knew the score
Or what that buzzing noise was for
She sunbathed topless, all galore
Took selfies by her pool

Johnson built himself a drone
A camera bee, hand-stitched and sewn
He wouldn’t leave that thing alone
To watch the girl next door

Said Mrs Johnson, one day, at tea
I wish you’d spend some time with me
All you do all day is play with your bee
Johnson brushed her words away

Poor Johnson didn’t know the score
Or what that buzzing noise was for
Mrs Johnson, topless, all galore
With Susie by the pool

Johnson watching from his shed
By the pool, the newly weds
I do, said she, I do, she said
You may kiss the brides

Johnson could not believe his eyes
The happy couple, champagne, bow ties,
Through a hole in the fence he spies
His bee drone floating in their pool

Poem written on theme of drones for “The Drones Are Coming”  on BBC Click Radio
and broadcast live from BBC Radio Theatre, BBC World Service, September 1st 2015. This episode covered civilian uses for drones, positive, creative and imaginative use of drones. I chose to write about voyeurism, but this programme also featured John Cale's innovative musical drone orchestra and using drones to drop seeds to plant more trees ... find out more on BBC iplayer!

BBC iplayer listen again: The Bird and the Bee 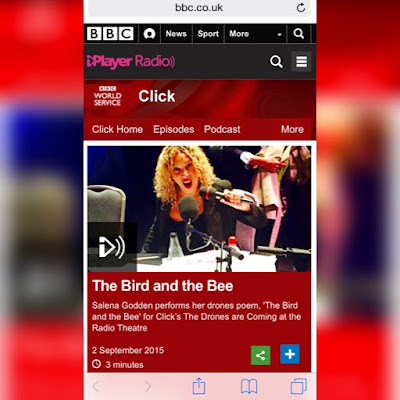