"Hope, it is the only thing stronger than fear." Words Not Wars and other good news... 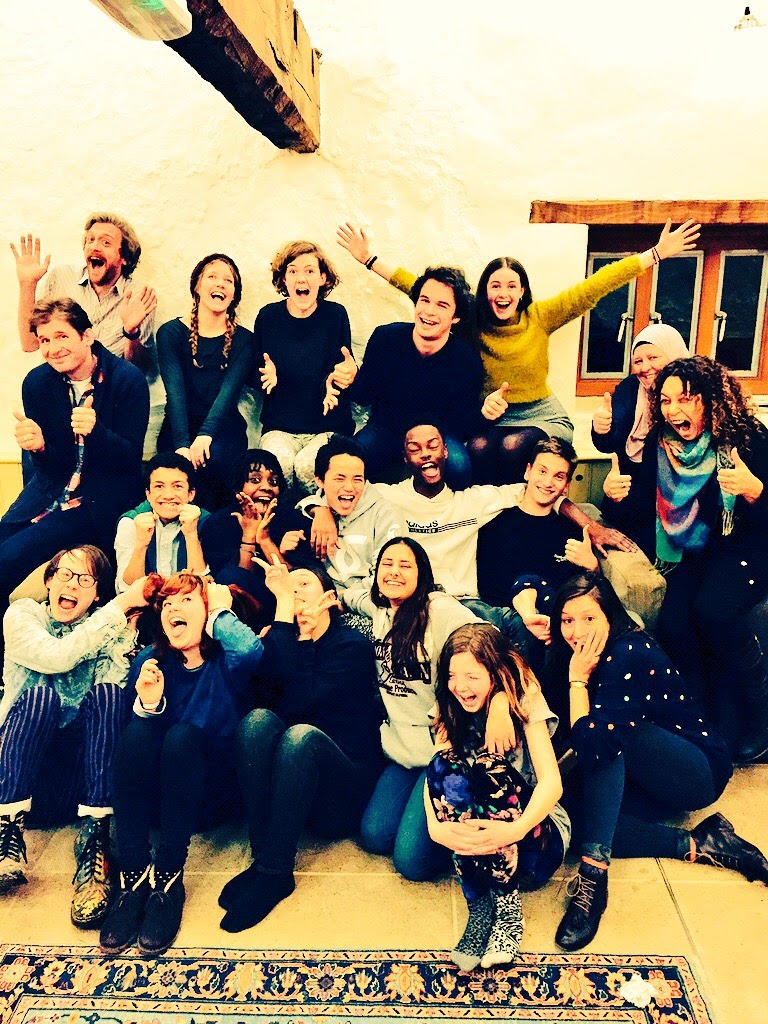 I am going to start this week by writing about how much I love your children. All of your teenagers. Every single one of your brilliant and beautiful kids. Today I even love the screaming toddlers that were tearing around my pub throughout the rugby and my Saturday afternoon pints. The kids are alright. Stop the press, hold the front page, there are some amazing things happening in the playground and for the first time in a long time I have hope.

Last week I worked alongside brilliant author Adam Marek mentoring the First Story competition winners at Arvon, Totleigh Barton. There we were, under cream tea skies, in the middle of the Devonshire countryside, work-shopping poems and stories, with hazy sunshine and the birds singing for the first days of spring. It was a fantastic landscape, the vernal equinox, and to top it all there was a lunar eclipse too. But these teenagers were no ordinary teenagers, these were First Story students, these were a hybrid super group of super talented young people producing the most outstanding poetry and prose all week. They were so inventive and imaginative, funny and kind, this was a truly remarkable week, filled with a lot of laughing and inspirational moments. 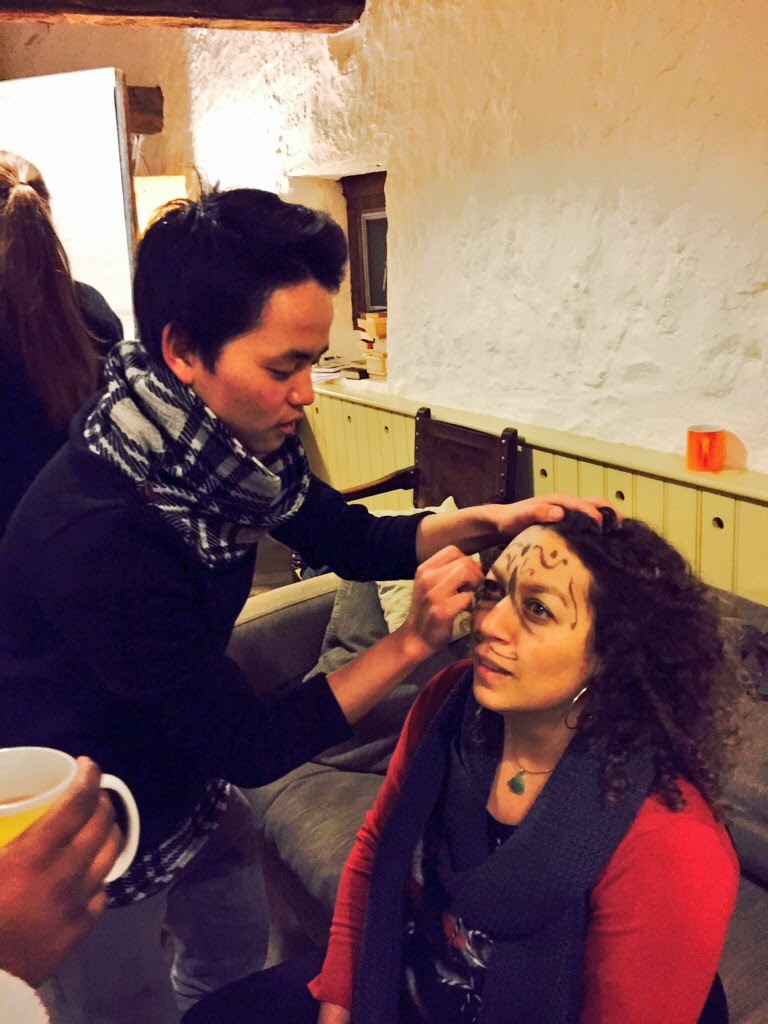 Mukahang Limbu (pictured drawing on my face) is from Oxford Spires Academy.
His piece was chosen by a panel of esteemed judges out of over 3,000 entries received from across the country, and was published in The Sunday Times, please click here to read it. 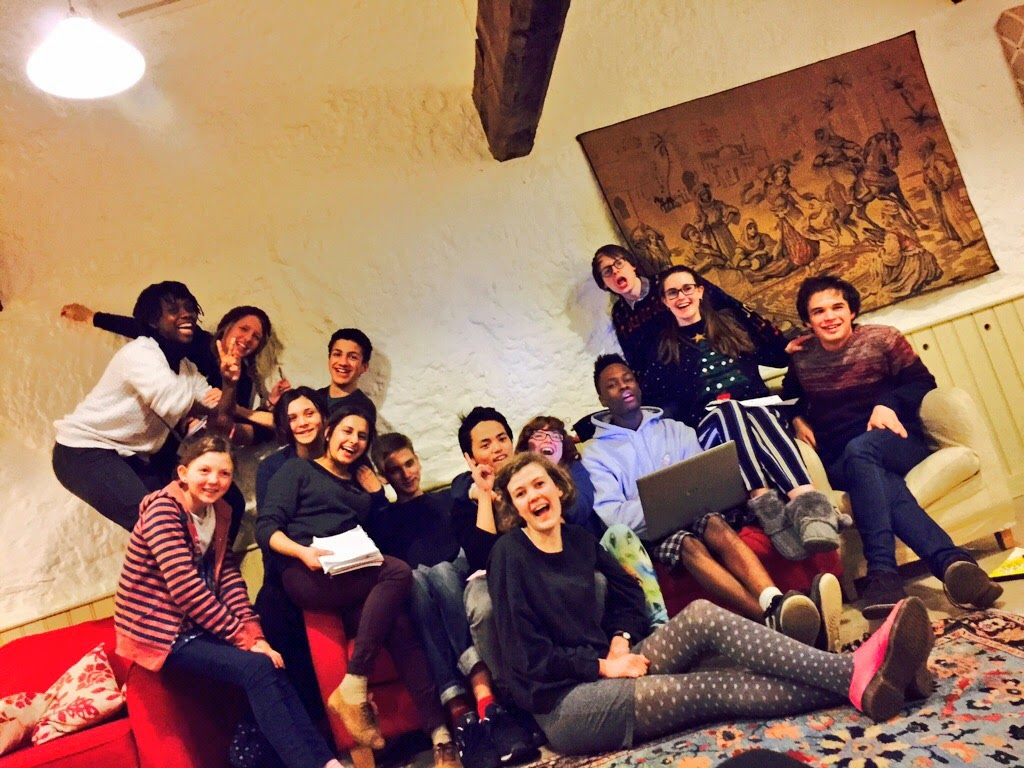 Today I feel as though I have peeked into a world of creative and colourful butterflies, a future that is bright and fresh and diverse, and about to spill out and all over the old black and white television world view. You’d better get ready. There is no black and white vision in the future, there is a huge blue sky, a million shapes and colours, without  boxes and limitations.

The guest speaker for this Arvon week was award-winning author Tim Bowler who was utterly inspirational. Tim read beautifully and he spoke about the journey of writing, I recall him telling us that nothing is wasted, that without the failure and the mistakes we wouldn’t get to the good stuff. His try, try, try again approach rang so true. He also talked about the students being at a most exciting time of their lives, their creativity and productivity and I couldn’t agree more.

I wonder why we aren’t listening to teenagers more. Perhaps we should consider lowering the age of voting. Why not? We already pressure teens to think about their futures, to decide what to study and do for the rest of their lives at that age, why not give them a vote to decide who rules this country too, give them the power to vote against the powers who are cutting all their benefits and nicking their funding. After all it is the kids that we will leave behind to clean up all this mess. Unless we all go green, stop fracking, stop playing war, stop blatantly killing and polluting everything, we simply won’t have any planet left to vote on. There aren’t many politicians I believe in much anymore, do you? I have always used my vote but I’m currently find it hard to tell the difference between real life politics, mud slinging and media hype, and an episode of House of Cards.
We should just admit it, we are rubbish at this, lets just bring in the young people. And as I write that I picture The Houses Of Parliament inhabited and ruled by a diverse group of teenagers nurturing a future that really is actually better for everyone. Imagine that. A future without boxes, without labels, without being ruled by corruption and old beefs from the 20th century, the end of the old school old boys club, a government selected without privilege and peerage. A fair system based on saving the environment, sowing the seeds of peace and making a better and safer world for future generations. Ah! There I go again, being all idealistic and getting carried away again, that’s what happens when you spend an idyllic week writing poems and watching young imaginations growing. You may say I’m a dreamer, but I’m not the only one.

When I returned to London I went to Camden’s Barfly to do a gig to support the brilliant WORDS NOT WARS event - This campaign has been started by 13 year old Bluebelle Wednesday Carroll. WORDS NOT WARS has been created because as Bluebelle said yesterday - WORDS CAN MAKE A DIFFERENCE  - the charity is all about setting up pen pal pairings with school children here in the UK writing letters with children in refugee camps. I think this is the best thing on the internet.

It was a great matinee of music and poetry performed by teachers and fantastic school students. The wonderful Ed Harcourt played live. The poet and journalist Jamie Kelsey Frye spoke eloquently about the cause and the need for hope, that with hope we have everything. I read an excerpt from SpringfieldRoad, choosing a chapter which was evocative of memories of the first days of spring in childhood. And then the whole event ended with the WORDS NOT WARS song, an anthem written and played by Bluebelle, her brother Cassidy and the WORDS NOT WARS choir pictured below. Not a dry eye in the house.   Please help the WORD NOT WARS campaign and support the crowd fund here.

Thank you to everyone at Arvon and First Story and Bluebelle and the WORDS NOT WARS crew that made this past week so magical and so full of light and hope. I am so excited to have met you all. Since Friday I have been inside this story: What if that wasn't an eclipse, but just a giant changing the lens on the camera they use to observe us and our minuscule bacteria life. What if that eclipse was just a slow motion image of a giant’s thumb obscuring the sun as he changed the lens of the camera they use to watch us as we multiply to extinction on this doomed Petri dish bacteria planet. What if the sun is a camera? OK. Ok Ok. Well if that’s true then with these extraordinary young people on this bacteria planet, the one thing we all have to share is a germ of hope, spread the germs, spread the good news, hope springs eternal. 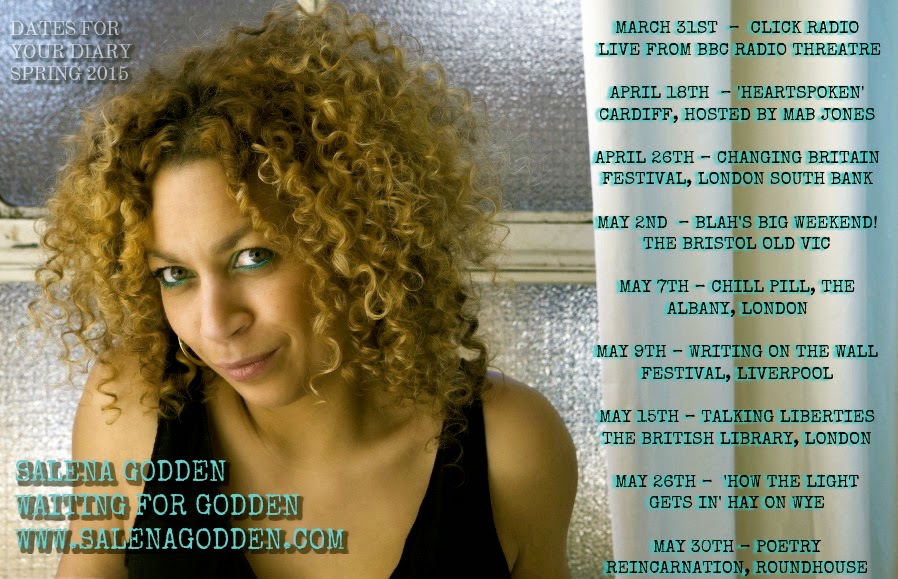 
May 26th: How The Light Gets In Festival / Hay-On-Wye 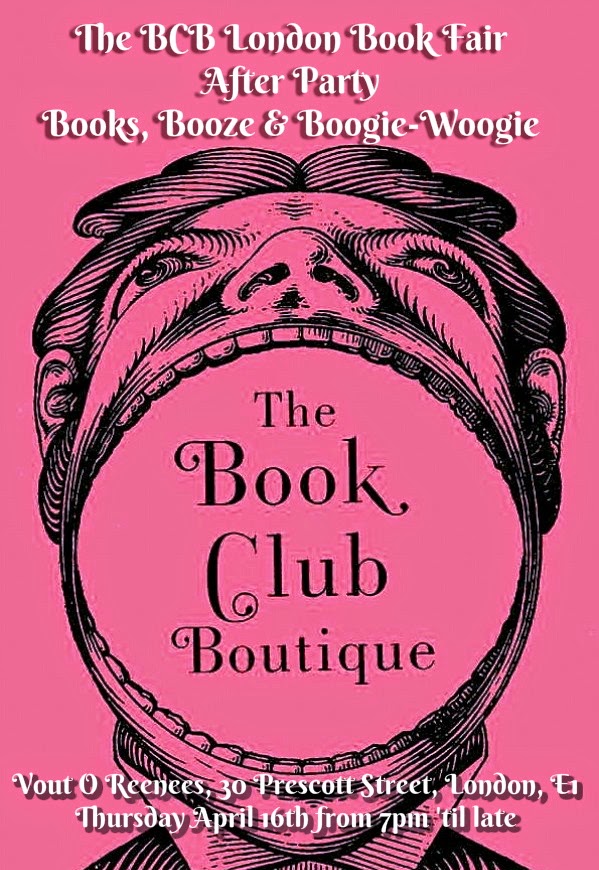